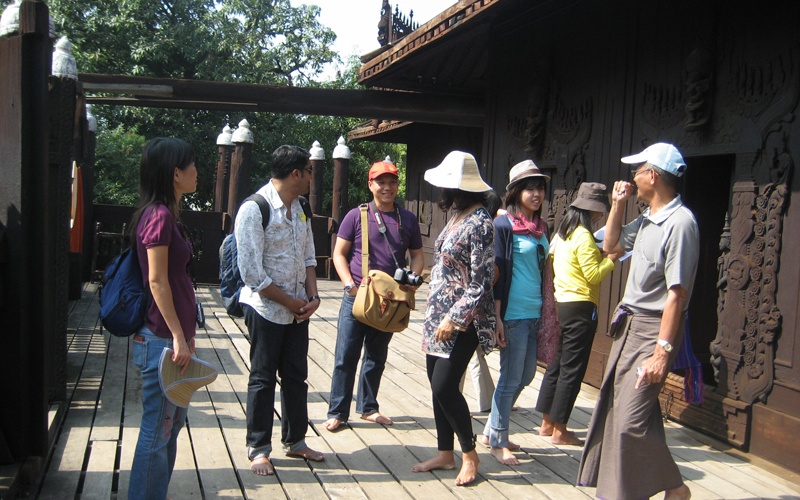 There have been different perspectives and interpretations on Myanmar history since it was viewed by different people. The perspectives and interpretations of Myanmar scholars, however, are not too well known because Myanmar scholars publish mostly in the Myanmar language. As the Regional Centre for History and Tradition, (SEAMEO CHAT) has a role in putting together a picture of Myanmar’s past, its development, and its mosaic of cultures and traditions, especially their strengths and weaknesses and ability to adapt in changing circumstances, as seen from the perspectives of the present community of scholars in the country.

The Myanmar History from Myanmar Perspectives Program has been conducted by SEAMEO CHAT annually since 2002. It consists of a series of lectures and discussions conducted by prominent Myanmar scholars and a five-day trip to the historical cities of Bago, Mandalay and Bagan. The program brings together the scholars to share their experiences and to enhance their knowledge on Myanmar history.

Annual lectures given on the first two days at SEAMEO CHAT include: Myanmar Historical Background by U Myo Aung, Bagan Art and Architecture by Professor Tun Aung Chain, Ancient Pyu Cities in Myanmar by Dr. San Shwe, Hantharwaddy: Maritime Trade and Land Empire by Dr. Win Myat Aung, History of Yangon by Dr. Naw Si Blut, and Mandalay; The Court and the City by U Myo Aung.

After two days lectures at SEAMEO CHAT, the field trip starts with the trip to Bago on which the participants visit Kanbawzathadi Palace and pagodas such as Shwemawdaw, Shwethalyaung and Kyaikpon pagodas. On the next day, participants leave for Mandalay some more pagodas, tapestry workshop, Hundred Multihued shuttles Loom and monasteries, gold leaf workshop, Innwa and Sagaing for two days. Then, they leave for Bagan. The participants start visiting and studying quite a number of pagodas and temples, and lacquerware workshop there. Since Bagan has a lot of ancient pagodas and temples, visiting well known pagodas and temples take two days for them to have a glimpse of the history and
architecture of Bagan.

From 2002 to 2015, in 12 years, 79 participants from Brunei Darussalam, Cambodia, Indonesia, Laos PDR, Malaysia, Philippines, Singapore, Thailand and Vietnam, Russia, Japan, Netherland and Switzerland attended the program. Among the participants, researchers from SEAMEO RIHED, SEAMEO SPAFA and SEAMEO SEN participated in the program with the grant of SEAMEO Education Development Fund. Though the participants have given good remarks on the program, SEAMEO CHAT is trying to make some better arrangements on the lectures as well as the fieldtrip and hope that more and more interested persons in Myanmar history will join the annual program in the coming years.

WE INVITE ANYONE WHO INTERESTED TO JOIN THE PROGRAM!

This is an annual event that usually holds in November. Anyone who interested to join the program may contact us before the month.