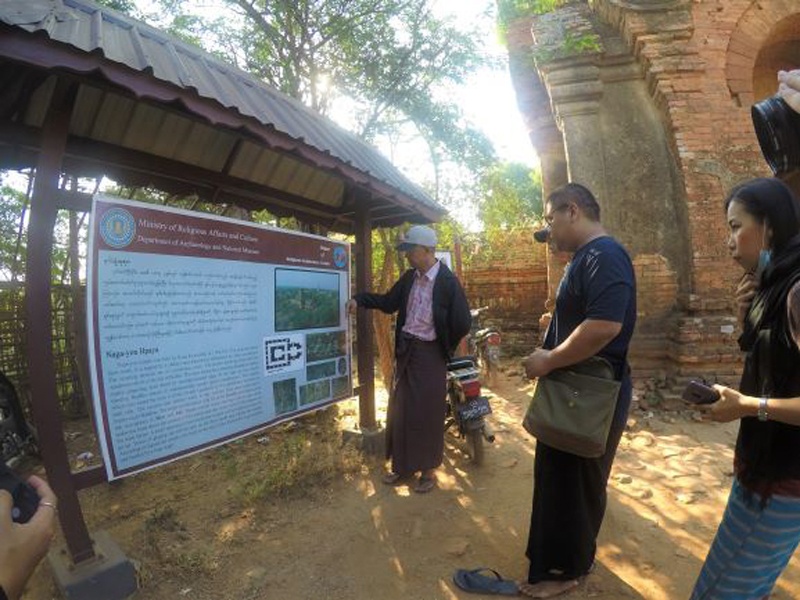 On 20-26 November 2018, SEAMEO CHAT once again organized their annual flagship programme, Myanmar History from Myanmar Perspective (MHMP). This is a programme SEAMEO CHAT has initiated since 2002 as an attempt to promote Myanmar History and Tradition to the foreigner. This year, there are 7 participants who joined the programme, 2 from Thailand, 1 from Singapore, 1 from Germany, and 3 from Indonesia.

The programme started with a series of lecture by SEAMEO CHAT’s experts. The subjects were varied, from the socio-politico-cultural aspect of Myanmar, their history and current political condition, to the art and architecture of Mandalay and Bagan.

The next day, before the dawn is breaking, the participant accompanied by 2 SEAMEO CHAT’s experts, Mr. U Myo Aung and Mr.Win Myat Aung, went for 6 days field trip to Mandalay and Bagan by van.

The first destination was Mandalay, the last royal capital of Myanmar Kingdom. The trip from Yangon to Mandalay took about 10 hours, including the lunch and refreshment stops. After arriving in Mandalay, the team first visited the Mandalay Hill, which the locals believed to be the place where Buddha (Gautama) gave his prophecy of the construction of the city.

Pic 3. Statue of the Buddha pointing toward the foot of Mandalay Hill

The next day, the team visited the Mandalay Royal Palace and Kuthodaw Pagoda, along with Shwenandaw, Atumashi, Shweinbin, and Thakawun monasteries, while also went to see the Kyautawgyi, Sandamuni, and Mahamuni Buddha images. The team also visited the golden leaf crafting workshop, to see how the golden leaves, used by Myanmar people to gild Buddha’s images as a show of devotion and veneration toward the Buddha, were created. The team ended the day enjoying a sunset at U Bein Bridge.

Pic 5. The U Pein Bridge, packed with masses crossing upon it

On the third day of the field trip, the team drove to Bagan. Stopping along the way at Amarapura, to visit longyi, Myanmar traditional textile, workshop, and also Kaunghmutaw and Kyawtawgyi pagoda.

On the fourth day, after visiting Soemingyi Monastery in the morning, the team went to Nagayon, Ananda, Htilominlo and Sulamani temples along with Dhammayazika pagoda. While resting for a while before lunch, the team visited a Lacquerware workshop located near the hotel where the team stayed in Bagan, followed by a series of short visit to numerous pagoda and temples. The team was lucky enough to stumble upon the novice monk and ear piercing procession.

Pic 7. The Ananda and Sulamani Temple.

On the last day, the team went to Mt. Popa, the holiest place of Nat worship in Myanmar. Along the way, the team stopped at the palm product workshop, to see how jaggery, Tanaka and other Myanmar traditional palm products were made. After coming back to Bagan, the team went to the Shwezigon Pagoda before ending the day watching the sun setting along the Irrawaddy river at Bupaya pagoda. This visit marks the end of the whole field trip. The very next day, the team traveled back to Yangon.