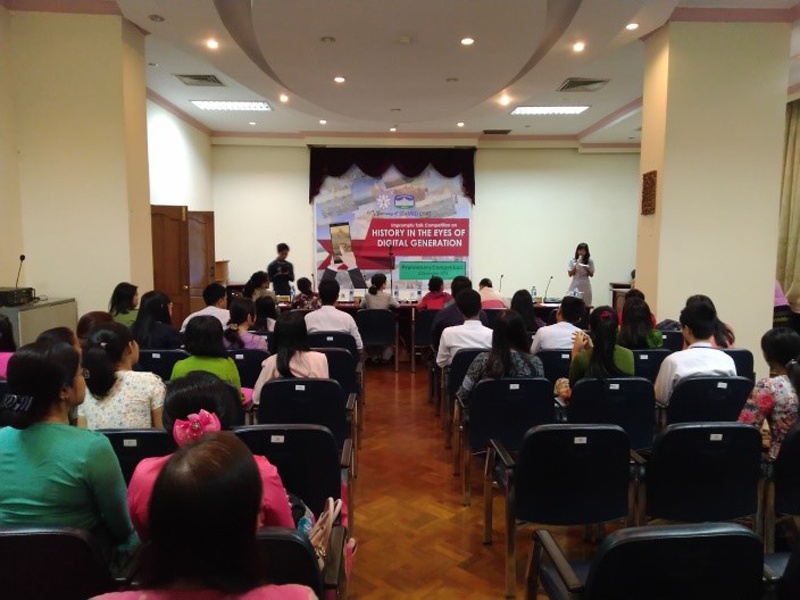 In order to celebrate its 18th Anniversary, SEAMEO CHAT held an Impromptu (English) Talk competition with the theme “History in the Eyes of Digital Generation”. This event was organized to understand how Myanmar youth view their own history while at the same time gauging their communication and English skill.

On 4th of December 2018, the preliminary stage of the competition was held. The contestants drew a lot to decide on their topic. For this preliminary stage, the topic given was not related to history, but more on general issues, such as city planning issue, environmental issue, teens issue, and so on. Because this stage purpose was to screening their English skill. History topic will be given on the final stage.

Pic 2. One of the five judges opens and explaining the rule of the competition to the audience

The competition started from 09.00 in the morning, by opening remarks from one of the judges. She also explain the criterion for the evaluation. Each contestant was given 3 minutes to talk about the topic they had drawn and another 3 minutes to answer 3 questions from the judges after it. The criterion of the selection were the pronunciation (speech clarity), the grammatical accuracy, the correlation to the topic given, and compliance to the time limit.

Pic 3. Contestant drawing their lot for topic which then shall be announced by the MC

Pic 4. Contestant talking on the stage in front of the judges (left), the media interviewed one of the contestants (right)

The competition went on smoothly until 14.00, after which the judges deliberated among themselves to decide on who shall be going to the next stage. The 5 judges chose 15 out of 32 contestants to proceed to the finals that will be held on December 17th to find the last 3 winners.